My best friend Lina will probably agree that there are few flavors that go together as well as spinach and Indian spices. Her favorite thing to order at an Indian restaurant is always Saag, regardless of how many times she's had it.

I had a huge bag of spinach left in the fridge and wanted to use it up. And since the weather is 25 degrees here today, I thought a nice warm soup would just hit the spot.

And let me tell you what - not only is this soup tasty, but it's extremely easy. From start to finish, I probably only spent about 20 minutes in the kitchen. It's also pretty healthy, using just a 1/2 cup of half & half at the end to give it some creaminess. The vegans in the house can easily substitute soy creamer to make this soup completely vegan.

Don't let the picture fool you - this soup is actually rather tasty! (Soups, especially green ones, are notoriously hard to photograph!) 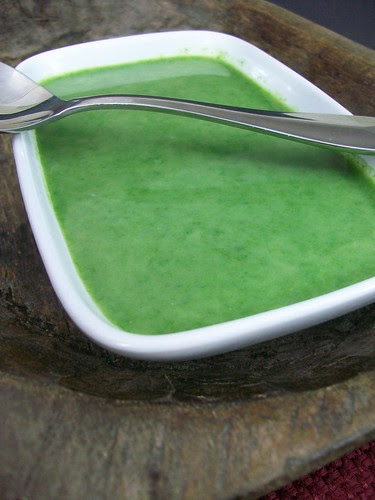 In a large stockpot, heat olive oil over medium high heat. Saute onions for 5 minutes, until tender. Add spinach and stir well. Add stock and bring to a boil. Lower heat and simmer for 8-10 minutes, until spinach is wilted. Stir in garam masala and salt. Remove from heat. Using an immersion blender, puree soup. Stir in half and half. Enjoy!

Looks spectacular..
instead of soy creamer, seriously try some cashew cream. I made my cream of veggie soup and celery root soup..and they were fabulous!!

I will have to try this one. I love cream soups..especially now that I can do them dairy and soy free! Thanks for the great recipe.

How do you get such great photos? I am still struggling with that.

Or vegans could use coconut milk which is what we use in the Caribbean a lot. Lovely soup

Made this with these slight adjustments: 2 t olive oil (not 2T) and 1/2 C cashew cream for the half and half. Next time I'd leave the salt out, but that's personal preference.

It was so delicious and so very easy. Mr. Omni loved it as much or more than I did!

Soup is hard to photograph -- but I love the color on this one.

Lovely recipe. With the help of my search engine I know what an immersion blender and garam masala are.