I've been craving mushrooms something fierce these past few days. At the same time, I'm at the point where I am getting a little sick of eating salad with the same dressings every day for lunch. So I thought I'd kill two birds with one stone and do a warm mushroom dressing.

This is a great little dressing and takes about 10 minutes to make from start to finish, which is a bonus! It would also be a great sauce to go over rice or pasta, or thrown on top of fish, steak, or even a baked potato. But it's simply wonderful as a salad dressing and it packs easily for work. Simply place mushrooms and dressing in a small container, heat up in the microwave, and toss over a separate container of salad greens. It couldn't get any easier! 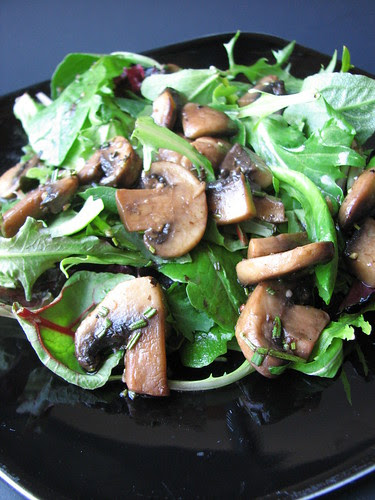 In a medium saucepan, heat olive oil over medium heat. Add garlic and saute for 30 seconds. Add mushrooms, season with salt and pepper, cover and saute for 6-7 minutes, stirring occasionally until tender. Add rosemary and vinegar and simmer for 1 to 2 additional minutes. Remove from heat and toss over fresh field greens.

There's probably not an easier side dish to make than roasted vegetables. Since I've been eating only fruits and vegetables, I've been roasting everything I can get my hands on. I just made some fabulous roasted cauliflower last night and today was some fresh green beans. Quick, easy, tasty - is there anything else??

Pretty much any vegetable can be roasted using these simple guidelines. Try brussel sprouts, cauliflower, asparagus, baby onions, potatoes - the possibilities are endless. This isn't really even a recipe so much as it is an easy guideline. No matter what you use, I can guarantee you you'll love the tastiness of a great roasted vegetable. 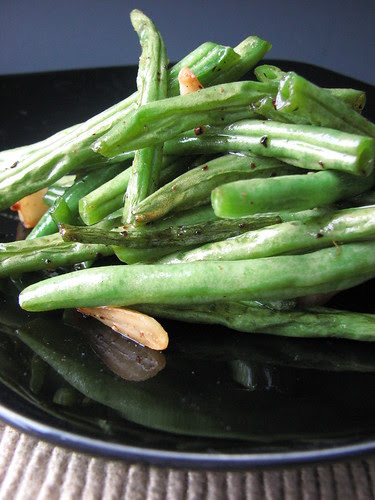 Preheat oven to 400. In a large baking dish or jelly pan, toss vegetables with enough olive oil to lightly coat them. Toss in some salt, pepper, and garlic cloves and combine well. Got some fresh herbs like rosemary or thyme? Throw a few sprigs in! Put in the oven and cook for 20-30 minutes, stirring occasionally until vegetables are fork tender. Serve and enjoy!
Posted by Fiber at 10:25 AM 7 comments:

I love reading other food blogs. There are so many great pictures and recipes that sometimes it's hard to keep track of all the things that strike my fancy and that I want to make. However, sometimes I'll find a recipe that looks so tasty that I want to make it immediately.

Running with Tweezers recently posted this recipe for "Holy Edamole" which immediately caught my eye. I loved her variations and I wanted to kick it up just a bit with some fresh cilantro. I also decreased the oil just a bit, and I think I found a dip recipe that will be making an appearance over and over again in the future. The edamame combined with the lemon and the spicy make such a fantastic dip that goes great with tortilla chips. Although you'll never fool anyone into thinking it's the original stuff, it is a great protein-filled alternative to the fattier real stuff.

*Just as an aside - I made this recipe before I started my 40-day thing, but took the picture a few days ago. Can't tell you how hard it was to stack those tortilla chips without putting any in my mouth! 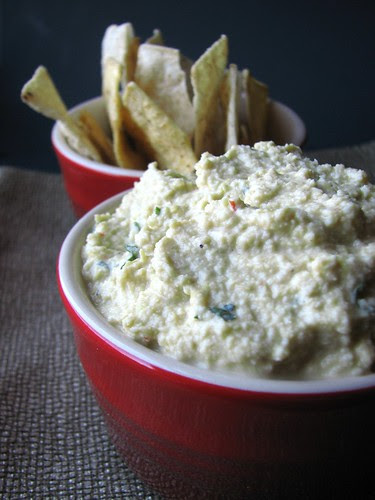 Combine all ingredients, except the cilantro in a food processor and process until well combined and smooth. This should take a few minutes. Remove, place into a bowl, and stir in cilantro. Chill for an hour or so for flavors to make friends. Serve and enjoy!!
Posted by Fiber at 12:30 PM 6 comments:

I've been seeing recipes for kale chips popping up all over. Everytime I see the idea, it intrigues me and I've wanted to make it for a long time. But it wasn't until I started doing this raw fast that I thought it'd be a great time to try them.

The thing that always tempts me the most during any sort of detox or fast is always something crunchy. Always. I stood in front of a bag of tortilla chips for about 5 minutes yesterday, fighting off the temptation. I won, but I still had that urge for something with some salt and some crunch to it.

Enter the kale chips. Since I'm allowing myself cooked vegetables, these fit perfectly. And listen to me when I say this - they are delicious. Now I'm not crazy enough to say that they taste just potato chips, but they are a great substitute. Even if you don't like kale, I'm betting you might like these, since you mostly taste the salty flavor.

The basic recipe I've been using is as follows, but I've also discovered it's much easier (and slightly tastier and healthier) to just liberally sprinkle them with a light italian or caesar vinaigrette and throw them in the oven. It's honestly a perfect little crunchy treat. 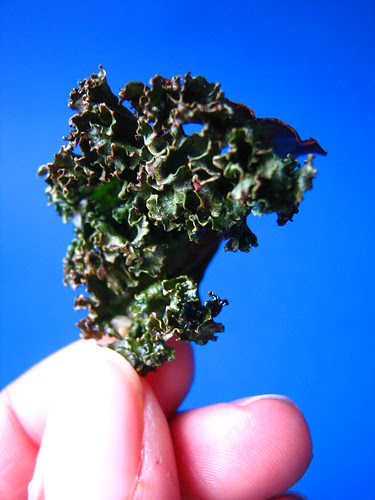 Preheat oven to 350 and line a baking sheet with parchment paper. Whisk together vinegar, oil, and salt, and toss with kale leaves. Place in a single layer on cookie sheet and place into oven. Bake 10-15 minutes, flipping halfway through until crispy. Do not overcook or allow them to become completely brown as they will taste bitter. Enjoy!
Posted by Fiber at 9:02 AM 25 comments:

My Relationship with Food

Food. Who doesn't love it? My relationship with food has been interesting over the course of my life. When I was younger and in high school, I had a very unhealthy relationship with food. I was addicted to fast food and candy, and would often eat those "bad for me" items in my car, throwing away the evidence before I got back to my parent's house. I was 50-60 pounds overweight and miserable.

Then at the age of 21, I decided to join my parents in their giving up something for Lent and ate only soup and salad for 40 days. I lost about 20 pounds, felt amazing, and continued eating healthier once Lent was over.

Since then, I try to give up something for Lent every year, usually something food-wise. There is something so challenging about denying yourself something, and it builds a great level of discipline. I did my detox last year, which was quite challenging. Yet, I felt more disciplined, not only in eating healthier, but in other areas of my life.

This year, I wanted to do something big. I haven't really done anything major for the past few years, so I wanted to challenge myself at a different level. I already eat a pretty streamlined and healthy diet, so it took some brainstorming to come up with what I was doing this year. But I think I finally have it. I decided that I would eat a mostly raw diet, except I will be including some cooked veggies. I also am giving up any beverages except water and tea.

Now don't worry, dear readers. I have a few things already made so I will have plenty of posting material, but I also plan on doing some fun things, such as ceviche. Hopefully these next 40 days will be over before I know it. Wish me luck!

And if you're giving up something for Lent, I'd love to hear about it in the comments.
Posted by Fiber at 8:38 AM 10 comments:

Sometimes a recipe comes around that I'm so excited about that I can barely wait until I post it to 28 Cooks. This is definitely one of those.

I love to play with spices, especially whole spices. I almost always have cumin seed, fennel seed, coriander, whole peppercorns, and a host of other spices hanging around in my spice cabinet. I especially love combining those that remind me of one of my favorite cuisines, Indian food.

I haven't made anything sweet in awhile, and I really wanted to make it more of a savory one. For some reason, even though I haven't eaten it in years and don't generally care for it, the idea of peanut brittle ended up on my "to cook soon" list. After thinking about it for awhile, I decided to do 2 different things with it. One - I didn't want to be fussing around with any thermometers or careful attendance, so I used the microwave. Trust me when I say this is probably the easiest candy recipe you'll ever make. The only thing you have to do is put it in the microwave, stir, and you've got yourself a great snack. The second thing I wanted to do was spice it up, using up some of my favorite whole spices. I think the combination of the spices really complement the brittle and make it a snack I'm sure you'll love. It's also delicious crumbled up and swirled into vanilla ice cream. 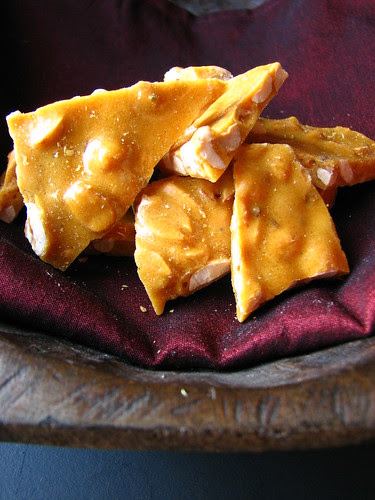 In a microwave-safe dish (I used my Pyrex 4-cup measuring bowl) combine sugar, corn syrup, salt, and peanuts. Place in microwave and heat for 4 minutes on high. Remove, stir well, and return back to the microwave for an additional 4 minutes. Remove, add butter, and stir well. Return back to the microwave for an additional 2 minutes. While peanut brittle is in the microwave, combine coriander, fennel, mustard, peppercorns, and cumin seed. Crush slightly in a mortar and pestle, bruising the spices well. Set aside. Remove brittle from the microwave, and add the baking soda and vanilla, stirring well. The mixture will foam up, so continue to stir for an additional minute. Add spices, stir for another minute, then spread thinly on a parchment-lined baking sheet. Cool, then break into pieces. Store in a airtight container.
Posted by Fiber at 12:14 PM 15 comments:

Winter has finally arrived. Today, we have school delays and ice on the roads and the wind is making its presence known. There's nothing better on a cold and rainy day than a nice warm bowl of hearty soup. Having a pot simmering away on the stove provides such a warm and homey feeling.

I started with some basic vegetables and then added in some orzo and kale to make it a bit heartier. The lemon thyme and balsamic vinegar added at the end round out the full and tasty flavor of this soup. Go ahead and curl up with a bowl of this delicious soup. 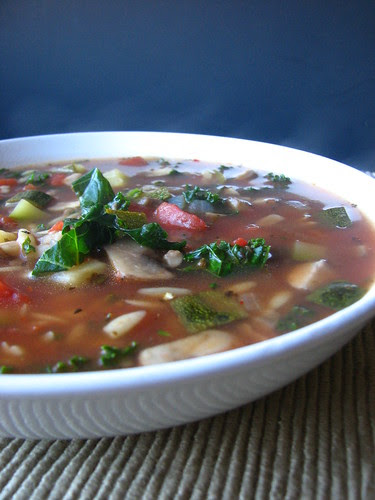 Heat up olive oil in large saucepan. Add garlic and saute for 30 seconds. Add onion and zucchini, sprinkle with a pinch of salt, cover and saute for 3 minutes.
Add mushrooms, replace cover, and saute for 3-4 minutes. Add tomatoes and vegetable stock and bring to a boil. Add orzo, lower heat, and simmer 15 minutes or until orzo is tender. Stir in pepper flakes, thyme, balsamic vinegar, and kale, and simmer for an additional minute. Remove from heat and serve.
Posted by Fiber at 9:08 AM 7 comments: