Every few weeks or so, I'll randomly pick something, usually produce, that I've either never cooked with, or haven't used in a long time. This week, it was fennel. I've used it before in my marinated olives recipe, but that's the extent of my fennel knowledge. I do love the fresh flavor of it, and wanted to use it in its raw state.

I wanted to do a salad and contrast some interesting flavors, and this salad was born. The cumin citrus dressing is lovely with the fennel, but would be great on just about any salad. The arugula and watercress add a nice bitter flavor, and contrast well with the sweetness of the dressing. 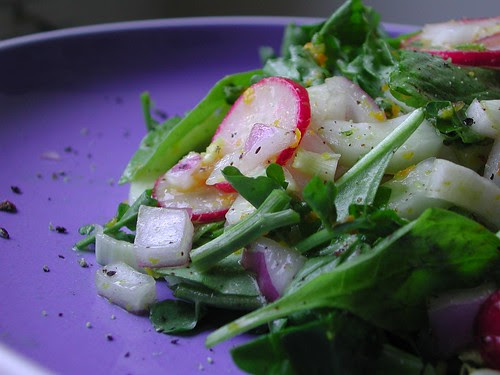 Combine juices, zest, oil, cumin, and pepper, and whisk well. Set aside. Combine the remaining ingredients in a bowl, toss with dressing, and serve.
Posted by Fiber at 2:20 PM

This looks great-very refreshing and zesty!! I like fennel.