Wow. Seriously, wow. The cooking school was such a great experience and so much fun! For those who don't know, my father bid at a charity silent auction for a 10-person cooking class to be held at the Giant Cooking School as a gift for my birthday this past December. I must admit, I was a little skeptical about a cooking school held in a grocery store, but as I had hoped, it was much more than expected.

Here's a picture of the 2 chefs that guided our experience, Kathy and Brandi. Both were extremely helpful and easy to talk to, and we had a good time joking around. 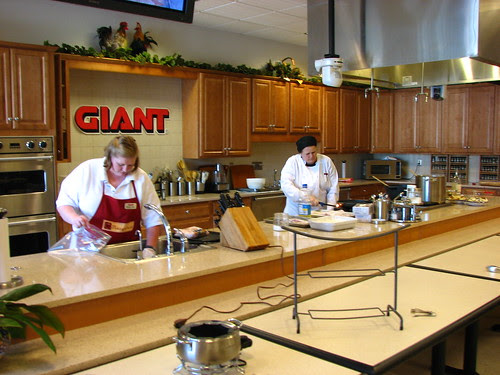 You can also see that the kitchen set-up is great for having small or large gatherings, and it was very nicely set up for my friends, family, and I. 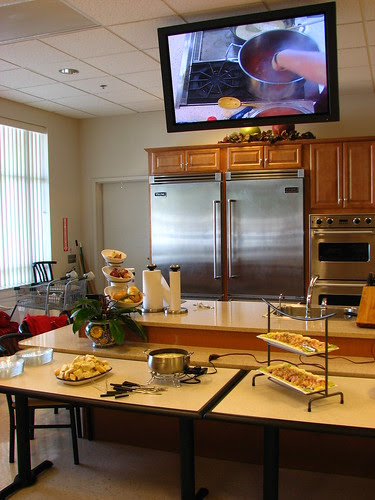 We started the evening with some fun nibblies, including these tasty spiced nuts. All recipes from the evening were nicely organized into a take-home packet for each guest so we can recreate them at home. This recipe looked exceptionally easy, mixing a touch of maple syrup, cayenne, rosemary, curry, and salt with raw nuts before baking. 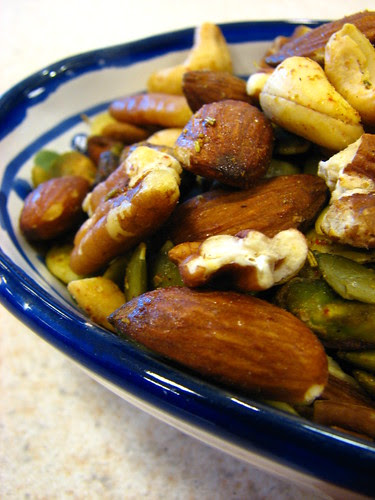 Next up were some tasty seafood appetizers. The tuna was exceptional. It was seared and encrusted with black and white sesame seeds. It was paired with an asian slaw that provided just the right amount of acidity and flavor. 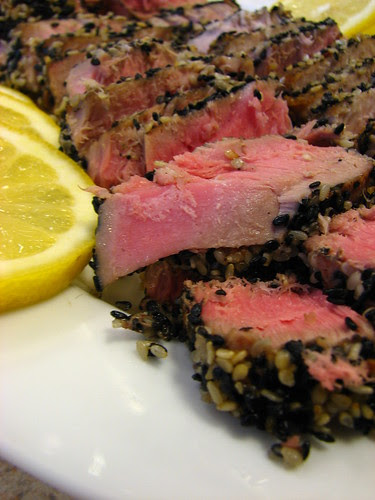 There was also a spicy boiled shrimp served with a raspberry-horseradish sauce. That was truly quite tasty and definitely an appetizer that would be perfect for serving to guests. I must admit I was skeptical about the combination of raspberry and horseradish, but it ended up being a great pairing. 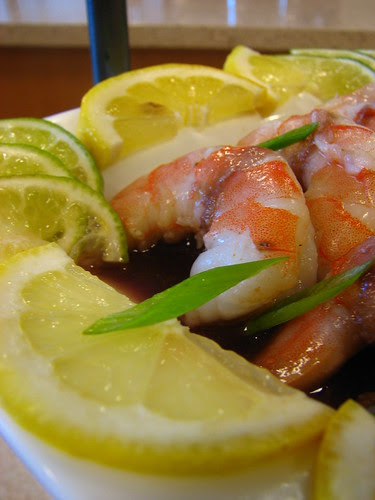 Unfortunately, the pictures of one of my favorite dishes, a Brie and Mushroom Fondue, didn't turn out quite as I had planned. But take my word for it - it was simply fantastic. Using shiitake and crimini mushrooms, combined with dry white wine and about a pound of brie, I'm not sure you can go wrong!

Check back on Friday for the rest of the story!
Posted by Fiber at 8:21 AM

Looks awesome, glad you had fun!

Could you please post recipes for the fondue and nuts? Thanks!

Magpie - thanks! We truly did!

Meeso - I know - I hope my kitchen is that huge someday!

Anon - Absolutely. I'll try to post them within the next week or so.