I love traveling because it always provides such great inspiration for cooking. This weekend was no exception. We hit some amazing places and restaurants, which I'll post about later this week, once the pictures are downloaded. One of the most memorable places we went was the West Side Market, which practically deserves its own post to describe the greatness it holds. But while walking through the market, we came upon a Greek stand that proclaimed they made "Cleveland's Best Hummus." They had about 4 different varieties, most of which I've made before, but it was the spinach hummus that caught my eye. I immediately put it on my list of things to make.

While driving to the grocery store this morning, I was trying to think of ways to kick it up a bit. I came up with a few variations, but nothing really interested me until the thought of pine nuts came across my mind. Not only do they add a great toasted flavor, but they also add a nice little texture variation. 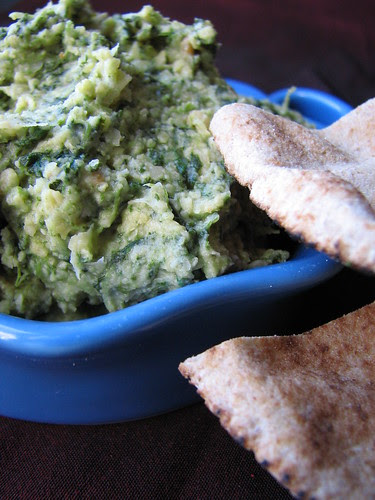 In a small skillet, toast pine nuts over medium high heat until slightly golden. Set aside to cool down. Drain half of the package of spinach and place into food processor. Save remaining spinach for another use. In food processor, process spinach and lemon juice until well chopped. Add pine nuts and pulse until nuts are finely chopped. Remove from processor and set aside. Add remaining ingredients to processor and process to desired texture. Add spinach mixture and pulse until well mixed. Allow to chill in the refridgerator for an hour or two for flavors to shake hands. Serve and enjoy!

*I cooked it according to the directions on the back of the package, which just involves putting it into a covered dish with a tbsp of water and throwing it into the microwave for 2 minutes.
Posted by Fiber at 11:44 AM

Sounds amazing and will be made tomorrow along with a couple of other 28 cooks specialities!

I just love your website. I believe you are a cooking goddess!! I've made many of your recipes and they all turn out great! My husband will be traveling on Wednesday and coming home late. I plan to surprise him with this recipe -- thank you so much!!

Oh man, that looks AMAZING! I like hummus but I always think it needs a little something extra...this would surely do the trick!

you really are big on hummus ;)

NO WAY. My friend Joe and I were at West Side Market on Saturday around 3pm, when were you there? I wish I new what you looked like, I would have totally rushed up for a autograph! I go to school at Case, West Side is amazing. Next time you're here go to Le Petite Triangle Cafe (formally Le Oui Oui Cafe).

Can't wait to here what restaurant you picked. We were tempted to go into this place called the Monastery, but the one waiter inside was aggressive and kept coming outside to ask us where we were going. Take care!

LJ - Let me know what else you make! I know you were looking for curry paste yesterday so I think I may know... =)

Anon - thanks! I love to hear reviews like that! I hope you enjoy this recipe just as much!

Hillary - I think the same! I love toasted pine nuts.

Anita - I think by that point we were gone. We spent most of the morning there and then had lunch at the Market Street Cafe. It would have been awesome to run into you, although I probably would have been so dazed by all of the good stuff there!

Great idea to make a pesto hummus! That sounds divine, I will have to try this the next time I make hummus!

We love hummus, and this sounds like a delicious change of pace. On top of that, spinach is so good for you that we're always looking for new ways to use it. Thanks!

Cedar - thanks! You'll have to give this a try.

Terry B - who doesn't love hummus? I do love the nutritional punch that the spinach adds to this hummus.

leave it to me to ask the rookie question, but is that frozen spinach already cooked or do i have to cook it first? hmmm ....
(i'm a much better knitter than cook)
thanks!
d

Gray - hey, that's a great question and I probably should have addressed it in the recipe. I cooked it according to the directions on the back of the package, which just involves putting it into a covered dish with a tbsp of water and throwing it into the microwave for 2 minutes. Thanks for asking - I'll be sure to update the recipe!

1. Cilantro Jalepeno - the all-time classic
2. Horseradish - TJ's has given so much to us
3. Spinach & Pine Nut - see above
4. Citrus Sesame - the unexpected goodness
5. Chipolte Cilantro - if I make this anymore for my family functions, they're going to start to think it's my recipe. Nah, not really.

Will i be able to get tahini from the spice guy at the Central Market?

A.C. - I don't think he has tahini. You can either skip it or get it from Rhubarb's.

Whoa!!! You have got quite a collection of hummus recipes here! I just made my first home made hummus yesterday and now I'm ready for more variations...looks like I found a great site!

We added about a teaspoon of toasted sesame oil to really bring out the nutty flavor of this recipe. Also, we accidentally blended the spinach in, and got a lovely green color. It was very tasty.