This weekend was all about the tamale. I've always loved them ever since I was little, but since I've become a vegetarian, I haven't had one. I finally found some vegetarian tamales at the West Side Market and quickly snatched a few of them up. After enjoying them immensely, I decided to try my hand at making them this weekend. I was pleasantly surprised at how relatively easy they were to make, although they do take a considerable amount of time. I am still working on fine-tuning the recipe, so I have nothing to post yet, but we're almost there.

But now, more about the market - absolutely amazing. I unfortunately forgot my camera at home, so I was at the mercy of a friend's, but we still came away with some good pictures.

I was absolutely floored by how fabulous the market was. They had so many fresh fish and seafood stands. 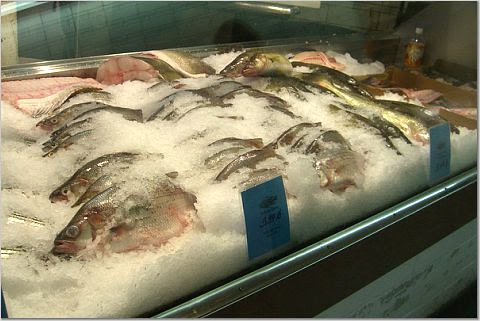 This was one of the fresh pasta stands. There must have been about 40 different varieties of homemade pasta with about every combination of flavors you could imagine. Surrounding it were more perogie varieties than I ever dreamed possible. Although I'm not crazy about them, my friend Abby brought a bunch home (blue cheese and potato, shiitake mushroom and white wine, bourbon wine, as well as 3-cheese) and declared them all fantastic. 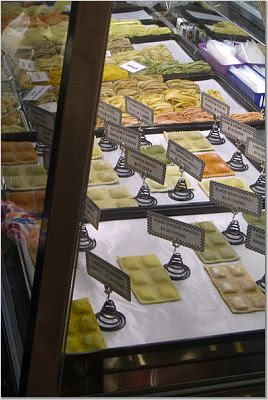 The butcher stands were fairly amazing too. Every cut of meat from almost any variety was available. Everything looked so amazing it *almost* made me wish I ate meat again. Almost. I did bring my father home some of the best looking beef jerky I've ever seen. He's loving it so much it's actually on a ration status and he is only allowing himself a few bites per day. 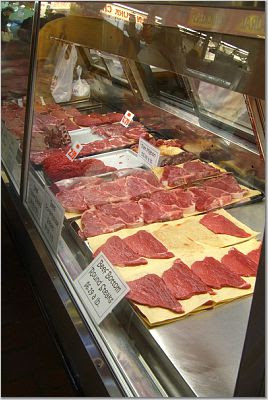 I definitely know that next year, I'm taking a huge cooler and finding some dry ice so I can bring more than just a few things home. I did pick up some non-perishables that were too tasty to pass up, such as smoked Alaskan salt and some other odds and ends from the Mediterranean stand.

Until then, we love ya, Cleveland.... 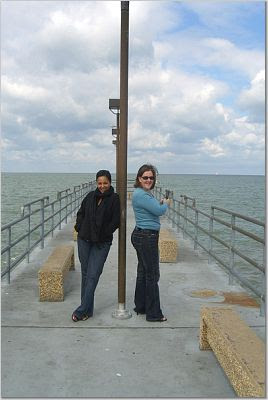 *If you're interested in reading more about Cleveland, here are some fantastic food blogs I've discovered:

Oh, I'm so sorry I missed it! If anyone's life is worth celebrating, it's Lina's! (and yours too, of course) Unfortunately, the littlest one is still too little for me to leave her yet. I might have to invite myself along to Celebrate Life 2008, if that's okay. :)

That pasta stand made me drool...as well as your description of what Abby brought home. YUM!!

I can't believe it! I was visiting a friend in Cleveland this weekend and I was at the West Side Market on Friday, loading up on sausages and fresh pasta. I missed the tamale stand though!!

I hope you do post a refined tamale blog. Being vegan I was able to wrangle together some great tamales last year but they were so time consuming I havnt been inspired til now to do 'em up again. Thanks!

Oh, wow! That market looks fantastic. Tamales. Hmmmm. I may have to look into making some of those myself.

Glad you found Kate's Fish and Ohio City Pasta, two of the best places at the market.

thanks for the info. it's so hard going to a new city and not knowing where to eat! i'll surely come back here for a reference when i'm off to Cleveland.

Your pics of the market are great. I love to hear when someone has a good experiance there. I've had the luxury of going there for the past 30 years since i was a child, and i'm always inspired by the cummunity and the culinary aspect of the space. Also, thanks for linking to my blog, i have a post, and alot of pics of the west side market if you dig deep enough.