Veggie Burgers with some bite to them!

I've been a vegaquarian for about 10 years now, and it's been one of the best decisions I've ever made in my life. But every year at grilling season, I do have a tiny twinge of sadness, as I see and smell ribs, steaks, and burgers on neighbor's grills. It's not that I want to eat meat, but there just aren't that many vegetarian things that are quite as easy as throwing a burger on the grill.

I've tried several different vegetarian burger recipes in the past, but they never seem to satisfy. They usually end up either falling apart on the grill, or being completely mushy and without texture on the inside. Although the flavor is really good, they really lack the texture that I'm looking for.

Until these burgers. I've had TVP in my pantry for awhile and although I've used it in some other recipes, I really don't use it as much as I could. For those of you who don't know, TVP is a soy-based textured vegetable protein. Although I try to stay away from soy as much as possible, I do make the occasional exception for some TVP.

This has honestly been one of the best grilled vegetarian burgers I've ever had. Not only is it flavorful, but it has a nice little texture to it. Now don't get crazy and think I'm saying that these are exactly like a real burger, but they are definitely closer to the texture than any other homemade burger I've ever tried. And the key to keeping them together is to freeze them for a bit before they actually hit the grill, which will allow them to hold together. I had no issues with them falling apart, unlike the other recipes I've tried. (as a sidenote - you can either grill these or bake them)

I've kept this recipe fairly simply spiced, but you can easily get creative with it, and make it spicy or Indian spiced or whatever flavor your little heart desires. Go ahead and give it a try - you just might make a vegetarian's day! 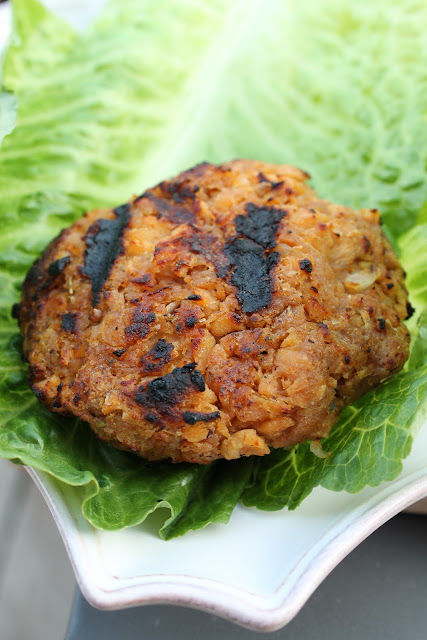 Veggie Burgers with some bite!
﻿
Makes 4 large burgers or 6 small burgers
1 cup TVP (textured vegetable protein)
3/4 cup boiling water
1/4 cup A-1 sauce
1/4 cup finely diced onion
1/2 tsp ground oregano
1/4 tsp garlic powder
1/2 cup vital wheat gluten
1 tbsp olive oil
In a medium sized bowl, combine the TVP with the boiling water and the A-1. Allow to stand for 10 minutes and then add in remaining ingredients. Stir well to combine. Scoop out a handful and shape into a patty, making sure to press firmly. Repeat until all burgers are formed.
Place on a foil-covered sheet and place in freezer for a minimum of 30 minutes. If grilling, preheat grill to medium heat. Rub a thin coat of olive oil on each side of the burger. Place on heated grates. Cook for 4-5 minutes on one side, then flip over to the other side and cook for an additional 4-5 minutes.
If baking, preheat oven to 350 degrees. Place on greased baking sheet and bake for 30 minutes, flipping halfway through.
Posted by Fiber at 9:37 AM

I have been turned off by veggie burgers for years for the same reasons you mentioned. These have brought me back!