So it's not secret that I could easily make a meal out of some roasted vegetables. Not only are they easy, but they are so hearty and satisfying that I have no problem sitting down with a large serving and calling it "dinner."

I was monkeying around on the internet and stumbled across a recipe called "Cracklin' Cauliflower." Apparently it's a recipe from a Whole Foods cookbook. I've never seen the original, but I was instantly intrigued by the variations that I came across. I decided to give it a try and boy, I was not disappointed. I didn't put in most of the ingredients that were in the original recipe, but I have to say I don't think this recipe misses them or lacks in some serious flavor punch.

Whether you eat this as a main dish or as a side dish, I think you'll be very satisfied by the amazing flavors! 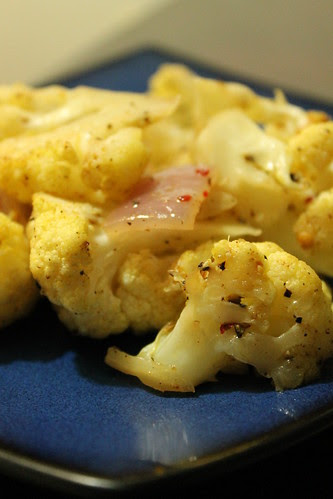 Preheat oven to 425 degrees. In a large roasting pan, combine cauliflower, onion, garlic, and ginger. Drizzle with olive oil and toss well. Add spices and mix well until evenly coated. Place in oven and bake for 30 minutes, stirring occasionally. Remove from oven and serve.
Posted by Fiber at 6:27 AM

Great dish! Works well as a side dish with many main courses. Also, you can adjust the heat by increasing or decreasing the curry powder.

I enjoyed some of these posts, thanks for writing. I will share them with my colleagues. Is it ok if we include some of your posts in our newsletter? We will link to your site, of course. :) I think our audience would enjoy these tidbits from time to time – they are all food and beverage industry professionals. You can email me at the address I provided.