Truffled Risotto with Leeks and Mushroom

Doesn't that title just sound fancy and delicious? But first, let me give a disclaimer - this is by no means a diet dish. Let's just be clear about that. However, it is a delicious, decadent, and extremely tasty treat meal.

The Boy had been given a few Italian delicacies from his parents, who recently returned from a trip to Italy. One was a jar of white truffles, and we've been talking about using them in a special dish for quite some time.

As soon as I found this recipe, I knew it was the one I wanted to try. (This recipe is a variation of one found on Epicurious) And let me tell you - I was not disappointed. The flavors are so rich and decadent and this would definitely be a wonderful dish to serve to guests.

And for those with risotto fears? Get rid of them! Although making risotto does require some careful attention, it was much easier than I thought!

Oh, and if you're curious, risotto is extremely hard to photograph! 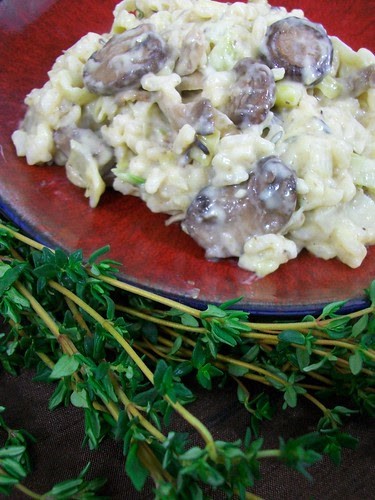 In a small saucepan, combine leeks and cream. Add freshly cracked pepper and salt to taste. Bring to a boil, lower heat, and simmer for 15-20 minutes, until leeks are soft and cream has thickened. Remove from heat and set aside.

Meanwhile, preheat oven to 425.Toss all mushroom ingredients in a large bowl and spread on a baking sheet. Bake for 30 minutes, until vegetables are softened and browned. Remove from oven and set aside.

Melt butter in saucepan. Add rice and stir well. Add white wine and stir until almost all liquid is absorbed. Add 1 cup hot broth. Simmer until broth is almost absorbed, stirring often, about 4 minutes. Add more broth, 1 cup at a time, allowing each addition to be absorbed before adding next and stirring often, until rice is tender and mixture is creamy, about 20 minutes longer. Remove from heat and stir in mushroom mixture, leeks, cheese, and truffles. Serve and enjoy!
Posted by Fiber at 6:49 PM

Delicious and surprisingly easy meal! We did this for a dinner with friends this past weekend and everyone loved it. I was a bit intimidated as it was my first time making risotto, but it turned out very well. This recipe allows you to create a rich and elegant meal without even trying!