So I have been craving Mexican and Spanish food like nobody's business. Perhaps it's the coming of Cinco de May, although to be honest, it wasn't until I was writing this blog post that I realized it's only 2 days away!

I'm almost embarrassed to admit that this is the first time I made my own Sofrito. As you may or may not be aware, sofrito is the basis of many hispanic dishes. It's the perfect flavoring base for all sorts of dishes. The onion and garlic and cilantro add just the right flavor notes.

As I said, this was my first time making it, and as easy as it was, I can definitely guarantee this will be a repeat recipe. It literally took about 20 minutes, start to finish. It freezes perfectly, so I freeze it in 1/2 cup portions so that I always have it on hand when the craving for Spanish food strikes!

And be sure to check back later this week for more recipes utilizing this wonderful item. 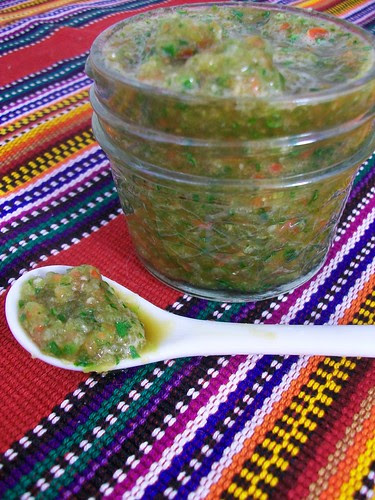 In a food processor, pulse garlic and jalapenos until chopped. Add bell peppers and onions, and pulse. Add tomatoes and cilantro, and process until well combined. Store in the refrigerator for use within 3-5 days, or freeze in 1/2 cup portions for later use.
Posted by Fiber at 7:00 PM