Oh, the days of spring. The weather is warmer and the days are getting longer and I think I'm in love with it. And yet, it's cold and rainy days like today that make me think of filling, warm, and delicious comfort food.

Although fall is traditionally the season for apples, I was able to get my hands on some super tasty ones at my local Wegmans. I haven't made an apple crisp in years, but for some reason, that's all I wanted. But not just any apple crisp - it needed some sort of flair. So I kicked it up with some gingersnaps and at the last minute, threw in some freshly cracked black pepper for some extra punch, which was fantastic.
This recipe is super easy to make and incredibly delicious! 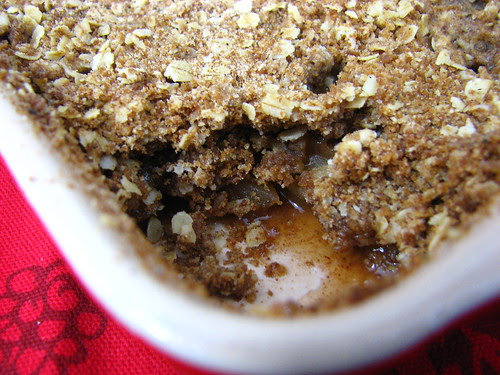 Preheat oven to 375. Combine cookie crumbs, flour, oats, brown sugar, cinnamon, nutmeg, and pepper in a medium-sized mixing bowl. Cut in butter, using a pastry blender until mixture resembles coarse crumbs. Set aside.
In another bowl, toss apples with lemon juice, sugar, cinnamon, and nutmeg. Place into well-oiled baking dish, and top with streusel. Place in preheated oven and bake for 30 minutes, until apples are bubbly and top is golden brown.
Posted by Fiber at 8:14 PM

I love it! Looks Yummy!

Yes, please...that looks amazing. I love the addition of the black pepper - I think that takes it from typical to something quite extraordinary. I can't wait to make this this weekend!

Black pepper in your DESSERT? I would never have thought of it! I also love the addition of gingersnaps! Good idea :)

Oh my gosh! Looks so yummy :) In fact I have some apples and until now I had no idea what to do with them. I didn't want to use them for something usual, but this looks so special... yum :) I'm gonna try it. Thanks for recipe :)