Wow - I just realized it's been awhile since a "Just Because It's Vegan" post. Although most of my dishes are either vegan-friendly or can be with some simple modifications, I like to make sure I'm posting recipes that highlight just how tasty vegan eatin' can be.

So this recipe is one of many firsts for me. One, first time I've ever used persimmons in anything. I was at our local Asian market and saw the most gorgeous persimmons and immediately grabbed a few to bring home, having no idea what their fate would be. Secondly, I've never used this particular bundt pan, as I'm not really a baker. (those astute readers will probably realize that by checking out the recipe archives at the side) Baking intimidates me as the science is more exact and I don't feel the liberty to just add and throw things in as it suits, as I can do with cooking.

That being said, I just decided to use this recipe as a guideline, made my own modifications, and crossed my fingers, hoping that it would actually work. And did it ever! The cake is moist, tasty, and the perfect showcase for the fantastically sweet persimmons. Not only is the cake super easy to throw together, but you can easily substitute apples or pears if you can't find the persimmons. No matter how you slice it, I think this is a tasty cake that will be making a few appearances this season. 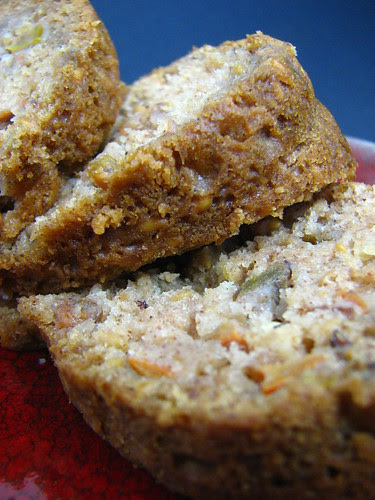 Preheat oven to 350 degrees. Spray a bundt pan with cooking oil and set aside. In a large bowl, combine flour, flax seed, baking soda, salt, cinnamon, nutmeg, and ginger. In a smaller bowl, whisk together water, lemon juice, agave, vinegar, and vanilla. Add to dry mixture, along with yogurt, and stir well to combine. Fold in persimmon until well mixed. Pour into pan and place into oven.
Bake for 30 minutes, or until a toothpick inserted comes out clean. Remove from oven, allow to cool in pan for 10-15 minutes, and then completely cool after removing pan.
Posted by Fiber at 8:20 PM

Hello !.
You may , perhaps very interested to know how one can make real money .
There is no need to invest much at first. You may start earning with as small sum of money as 20-100 dollars.

AimTrust is what you need
The firm incorporates an offshore structure with advanced asset management technologies in production and delivery of pipes for oil and gas.

Its head office is in Panama with offices everywhere: In USA, Canada, Cyprus.
Do you want to become a happy investor?
That`s your chance That`s what you really need!

I`m happy and lucky, I began to get income with the help of this company,
and I invite you to do the same. If it gets down to choose a correct partner utilizes your money in a right way - that`s the AimTrust!.
I make 2G daily, and my first investment was 500 dollars only!
It`s easy to get involved , just click this link http://jisekihi.angelcities.com/xotema.html
and lucky you`re! Let`s take this option together to get rid of nastiness of the life

This is the most delicious dish I have ever had.... I made some changes in the recipe ...Instead of yogurt I put Patan ghee which is clarified form of yogurt... It improved the taste... Thanks for such wonderful dish....