A lone eggplant wandered its way into my kitchen, and knowing I have a busy week ahead of me, I decided to use it up as soon as possible and cook something tasty with it. I immediately grabbed my newest "go-to" cookbook, 1000 Vegan Recipes, that I reviewed last week. Although there were a few tasty eggplant recipes, I quickly settled on the eggplant fritters, especially since everything was already stocked in my kitchen.

What a quick and tasty recipe to make. And what I love about it is that I'm already thinking of a zillion variations. I made a few changes of my own, but kept pretty true to the original recipe. I think next time, I may try using zucchini instead of eggplant, and then try a potato variation. I'm also thinking these would be lovely to make ahead of time and store in the freezer, making them just perfect for a tasty appetizer for unexpected guests. 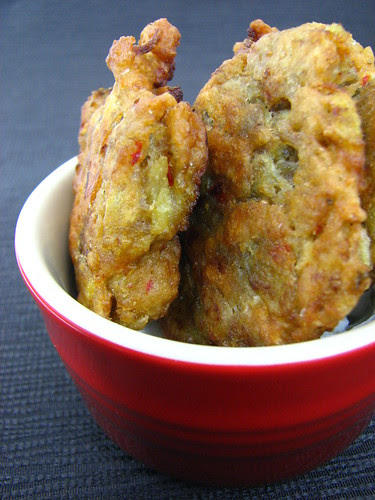 In a large saucepan, combine the eggplant, water, and lemon juice. Cover and bring to a boil, then reduce heat to low, and cook until the eggplant is very soft, about 10 minutes. Drain the eggplant, pressing out excess liquid, and place in a small bowl. Add chili sauce and mint, and mix well.
In a separate bowl, combine flour, coriander, cumin, baking powder, and salt. Add to the eggplant mixture and toss to combine.
In a large skillet, heat a thin layer of oil over medium-high heat. Add the eggplant mixture, a tablespoon at a time, adding as many fritters as you can without crowding. Fry, turning as needed, until golden brown all over, 2-3 minutes per side.
Posted by Fiber at 6:38 PM

Mmm, this is making me want some fried food right now. Is chili-garlic sauce more than just chili peppers and crushed garlic?

These look wonderful! And I've never heard of that cookbook; I'll have to check it out!

I love Indian eggplant fritters, but I'd always opt for besan (chickpea flour) instead of regular flour, the taste is so much better.

My mother would make us these when I was a child, it was the only way me and my younger siblings woudl eat aubergine. These looks great!

I love that these are not deep fried.

Liz - my chili garlic sauce also has sugar, rice vinegar, modified corn starch (yuck) and citric acid. So I think if you added some rice vinegar to chilis and garlic you would have it.

I may use both eggplant and zucchini to make this. It sounds really delicious.

These were awesome! My whole family loved them and they were fast and easy to make. I didn't use the chili-garlic sauce but put in a little grated garlic. Thank you!!!

Made these. Didn't change a thing. They were delicious and eaten far too quickly :) Thanks for a great recipe.