One of the things I love about cooking is that there's always something new to discover and try. My parents and I split a CSA box this year (which seriously, if you haven't done yet, please do so for next season - it's so well worth it!) and were recently given a spaghetti squash. Although I've had it a few times, I've never attempted to make it myself.

I did the normal steps of googling for a good recipe, then I flipped through my usual standby cookbooks on what to do with it. I have to admit that I was slightly disappointed at the offerings. Most of the recipes were simply baking it and eating it plain, or substituting it for pasta and topping with marinara. Neither of those ideas sounded good to me, so I kept thinking of what to do with it.

I came across this recipe for a gratin that sounded simple, yet tasty. I kicked around a few variations, but it wasn't until I tasted the most delicious Organic Coconut Curry chocolate at Wegmans today that I knew what it needed. I took a page from the spice blend of my Indian Spiced Peanut Brittle (seriously, very tasty!) and also threw in some fresh cilantro. And whoa! This dish is a great tasty sidedish to serve and a wonderful way to try this delicious seasonal squash. Plus, the recipe is dead simple, and if you use fat-free sour cream and skim mozzarella, it's pretty healthy too! 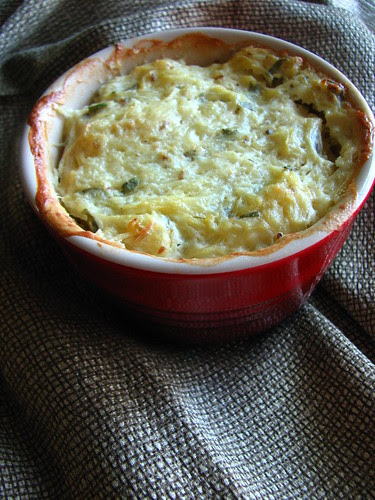 The easiest way to prepare spaghetti squash is to microwave it. Cut squash in half, from stem to blossom end. Scoop out seeds of both halves. Place one half in a microwave-safe baking dish, and cover with plastic wrap. Microwave on high for 10-12 minutes until tender. Repeat with remaining half. Using a fork, scrape squash out of shells into a large mixing bowl. Throw away skin.

Preheat oven to 400 degrees. Using a mortar and pestle, grind up coriander, fennel, mustard, and cumin seeds, along with white peppercorns. Add to squash mixture with remaining ingredients. Stir well. Place in well-oiled baking dish and bake in oven for 30 minutes, until bubbly. Serve and enjoy!

Enjoy this and other great recipes with Tempt My Tummy Tuesday!
Posted by Fiber at 8:47 PM

You truly make cooking sound so easy and fun to do! Looking forward to getting together and making home-made tamales. Now that is what I am taking about.

Oh my. That looks and sounds wonderful!! Thanks for sharing your recipe and joining us for Tempt My Tummy Tuesday.

This sounds great, I was thinking curry flavours would be good in this.

GREAT!!! recipe I like all the spices in this recipe. Geri

Thank you, As you said, spaghetti squash recipes are a little hard to find....this one is a keeper!

YUM...just in time for lots of spaghetti squash :)

That looks delicious! I love all kinds of squash :)

I've found that we can bake a whole spaghetti squash in an oval crockpot. Clean the outside and poke it a few times to vent. Cook on High for a couple of hours. Take out, cut in half and remove seeds. Scrape out shreds and return to crock with sauces or desired spices, cover and let heat on Low. Hope this helps someone else.

This looks really delicious. I have a spagetti squash in my fridge now, I wonder if I could just use curry rather than grinding up those spices?

Anon - thanks, Mom, my ever faithful reader.

Katerina - I'm with you. I think it'd be outstanding.

Sasha - I agree - nothing says comfort food like a nice hot gratin.

Tinkerbelle - you'll have to let me know if you give it a try!

Mrs. P - I know! I have to get another one and make it again. It was that good!

Anon - what a great cooking tip. Thanks for sharing. I'll have to remember that for the future.

Brenda - absolutely. I think it would do just as well. Let me know how it turns out for you!

Oh wow! I've always wanted to find a decadent way of preparing spaghetti squash and I think this may be it. That cheesy crust is what dreams are made of.

I just made this tonight, with great success. I was out of sour cream so I used Fage 0% yogurt, which added a slightly different flavor than I think this recipe is going for, but it was still delicious!

Made this tonight and it was fantastic! Thanks for sharing. -heather