My mother was, and still is, a fantastic cook. One of my favorite meals as a child that she would make were her salmon cakes. It was definitely an odd choice to have as a favorite kid's meal, but we always loved when she made them.

I was thinking about making something different, yet relatively simple, when her salmon cakes came to mind. I immediately jotted down a list of what I "thought" may be good in them and headed off to the store.

I got to the canned meat section, which can be a little scary to a vegetarian, and noticed the salmon shelf. There were a few different kinds at a few different price points. I instinctively knew the bottom tier probably wasn't what I wanted, and I grabbed 2 cans of a Wild Alaskan salmon. The label was so pretty and gourmet-looking, I just knew I couldn't be wrong.

Well, I got home and started pulling out what I needed for the recipe. I grabbed the can opener and just as I was about to open the can, I thought, "Huh - I guess I just open this like a can of tuna and go from there." I gave another quick look to the label when I read the phrase "contains skin and bones." What?!??! Why would the can contain skin and bones? I popped those bad boys open, and sure enough, there was plenty of skin and plenty of bones. I'm not lying - had I not already had the wheels in motion, I would have tossed those two cans and just gotten the cans where it's already deboned and skinned. Instead, I spent about 30 minutes, picking out the bones and skin and salvaging as much meat as I could.

All that to say, do yourself a favor and buy the other stuff - you know, the stuff that doesn't look like they just hacked up a fish and shoved it into a can. You'll thank me later. (as an aside, I just spoke with the Mama herself, and she says that she always got the skin and bone kind and just picked around the bone bits)

That aside, these cakes are very tasty. There's not much too them, yet they really deliver the flavors. They also freeze exceptionally well uncooked, so this is something you can make ahead of time and keep on hand in the freezer. They're lovely served with tartar sauce, or I made an easy cilantro aioli by tossing some minced cilantro in some mayo.

This recipe is also a very cheap option for a filling main dish. Total cost of ingredients was under $10. 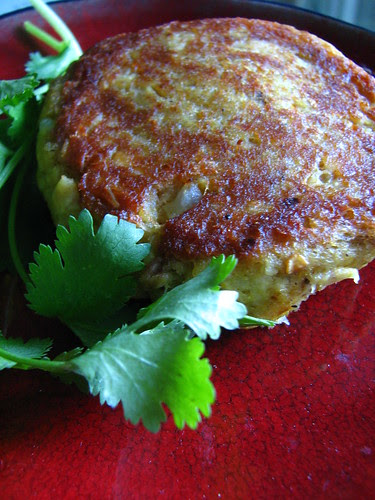 Combine all ingredients in a large bowl and mix until well combined. With hands, form 6 patties and set aside. In a frying pan, pour a tbsp or two of oil. Heat over medium high heat. Fry patties for 2-3 minutes each side until done. If freezing, place between layers of wax/parchment paper in freezer bags and freeze. Thaw and cook as above.
Posted by Fiber at 5:25 PM

Ain't it the truth?! You only have to buy that can of that nasty 'uncleaned' stuff one time before you vow never to buy it again!

Back to the food...when I make mine (either with salmon or tuna) I always add about half a can of mashed chickpeas and often some kind of shredded cheese to the mix, no matter what spices I do. I serve it to the kids on buns, and they don't know that I sneaked (snuck?) something healthy into them! We all love tuna and/or salmon burgers around here!

These sound really good. My husband makes salmon cakes from his Mom's recipe (mashed potatoes and regular seasonings)but these sound a little more adventurous.
question - when you use cumin, do you use the seeds, or ground?
Thanks

YUM! I do like salmon cakes, and yes- the squick factor of the "what the heck is all of THIS CRAP IN THE CAN???" had doomed me to not making them more than once, but it is a lot cheaper than the other kind. These? I will definitely make. Tasty!

I found your food blog going through a few links. Glad I ran into it. Didn't know that the food blog community was so big. I love your posts!

You should try getting the salmon that comes in a sort of plastic ziploc container type thing... it's not the best quality fish in the world, but I've used it a couple of times to make salmon salad (like tuna salad, but with salmon!) It's good for that kind of thing, and it's still cheap.