I have a confession. It's literally been a week or two since I've actually made anything in my kitchen. Crazy, huh?? And when I actually made this, it felt incredible to be back behind the stove creating and cooking.

I wanted something hearty and filling, yet something with some kick. I was walking through the grocery store and my eyes lit on soyrizo, which is something I've never worked with. I also threw some potatoes in there and a can of chipotle peppers, hoping it would all flow together well.

I'm pleased to report that they did. The chipotles provide just the right amount of heat, and the potatoes add a nice hearty feel to it that is sure to leave you satisfied on a cold winter's night. For those carnivores, you could totally substitute chorizo. And since this recipe only has 6 ingredients, not including salt or pepper, it's a cinch to make! This is one of those hearty winter soups to be enjoyed all season long! 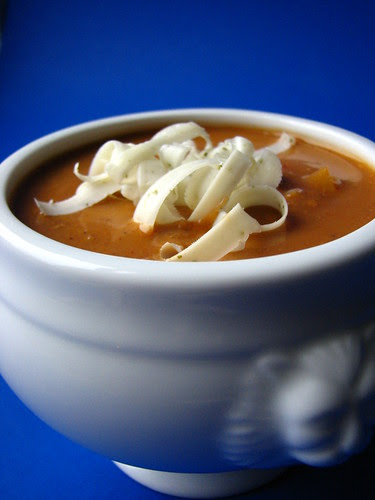 In a large pot, crumble soyrizo and cook for 5 minutes over medium high heat. Remove from pot and set aside. Add potatoes and saute for a minute or two. Add broth and bring to a boil. Boil for 5 minutes, stirring frequently. Meanwhile, process chipotle peppers and adobo sauce in food processor until minced well. Add to soup, along with cumin. Season to taste with salt and pepper. Continue to boil until potatoes are tender. Process for a few seconds with an immersion blender, leaving some chunks of potato. (Alternately, you can pour half of the soup into a blender and process until smooth). Add in cooked chorizo and soy creamer. Stir well and simmer soup for an additional 5 minutes. Serve and enjoy!
Posted by Fiber at 2:38 PM

What's on top of the soup?

Your blog is awesome!

Christiane,
Even our two year old liked your salad recipe. Thanks for sharing such great recipes.