I have a confession to make - I'm not a baker. I could probably count on 1 hand the number of times I bake something during a year. Matter of fact, if you look through my recipe archives to the right, I can guarantee the percentage of baked goods is probably about 3%. To me, baking seems too rigid and strict. You have to keep exact proportions on certain ingredients, and you can't just wing it, which is what I love about cooking. On top of that, I'm not really a sweet-eating girl. Don't get me wrong - I love a chocolate-chip cookie or a good blueberry muffin as much as the next person. But you'll tempt me much faster with a crunchy salty treat than a sweet one.

But every once in awhile, I'll see a recipe for a baked good that sounds tasty enough that I just want to make it. Enter La Dolce Vegan

's Cinnamon Doughnut Holes. I don't know why this caught my eye, as it's been probably years since a doughnut has crossed my lips. But maybe I just have fond memories of those boxes of Munchkins from Dunkin Donuts that my mother used to buy for special occasions when i was younger. Either way, I saw the recipe and immediately bookmarked it.

These are tasty and the perfect bite-size treat. A few of these with a cup of coffee in the morning will set you on the right path. And not only that, they are relatively light and very easy to make. 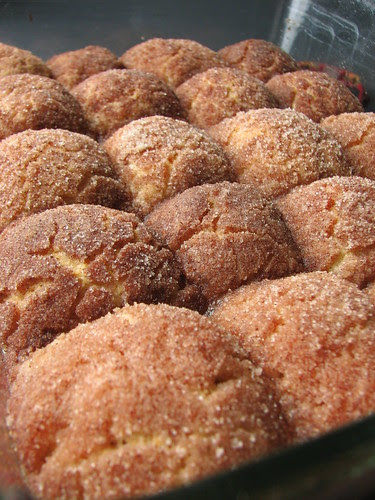 Preheat oven to 425. Melt margarine in a small saucepan over medium heat. Place in small bowl and set aside. In another small bowl, combine sugar and cinnamon and set aside.
In large bowl, combine flour, cereal, sugar, baking powder, and salt. Cut in vegetable shortening with a pastry blender until mixture resembles coarse crumbs. Stir in soymilk until just combined. Start rolling dough into 1-inch balls with your hands and set aside until finished. Roll each ball in margarine and then shake well in cinnamon sugar mixture. Place in lightly-oiled 8x8 baking dish. Place into preheated oven and bake for 16-18 minutes. Remove and cool in pan.
Posted by Fiber at 6:45 PM

Hi,
What's with the Rice Krispies? What do they do for the finished product? Do we need them in there?
thanks

Other than add a nice little crunchy texture to the doughnuts, I'm not sure you need them.

wow, those look amazing!! i'd love one right now!

These do look very tempting...I think I'd end up eating them till I was sick :D

These look great! I think I have baking project for the weekend.....

Hi- I'm not quite clear on what "vegetable shortening" refers to. Can someone enlighten me? Thanks!

your picture looks amazing! I have no idea you use rice crispis for doughnut!

Could I substitute regular milk for soymilk? I don't typically buy soymilk and fear that the remainder of the gallon would go to waste in my frisge.

Anita - sure. I used Crisco. You could use any similar brand. It's not the healthiest, but it is a doughnut after all! =)

Mel - thanks! The rice crispies do add a nice little crunchy treat.

Anon - absolutely. I just use soymilk which keeps it vegan, but you can feel free to sub cow milk.

I made these and they were loved by my family! Thanks for helping us share doughnuts again! Since I am allergic to dairy these were a great treat for all of us to share. I referenced you on my blog post!

Thanks for the brilliant recipe!