I admit, even I'm guilty. Guilty of that mindset that just because something is vegan, it can't taste that good. Even though I've been a vegetarian for years, I still have the tendency to shy away from those things labeled "Vegan." And you know what - I have absolutely no reason to.

My friend, LJ, who just recently went vegan, made these brownies last week. After both her kids and her meat-eating husband loved them, she passed the recipe on to me. I have to admit, I was slightly skeptical, but I figured I'd give them a try. And I'm glad I did. Not only are they super easy to make, but they taste really really good. There's plenty of versions on the internet for these things, but I switched it up a bit adding some dried cherries. I'm sure you could substitute any other dried fruit as well and have some great tasty variations.

This is also the first entry in a new feature that will be popping up from time to time here on 28 Cooks, entitled "Just Because It's Vegan." These will be recipes that will be strictly vegan, but will satisfy almost everyone. 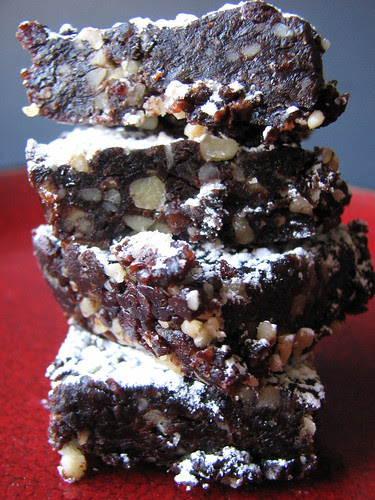 Process all in food processor until ingredients are well mixed and chopped. Press into a small square baking pan and freeze for 1 hour. Slice brownies into 12 pieces. Store in fridge.

Nutritional information per serving - 119 calories, less than 1 g saturated fat, 2 grams of protein
Posted by Fiber at 8:33 AM

mmmm, sounds like a lara bar!! i love it and will definitely try this recipe out.

Yum - I just bought some agave nectar myself today! These will be high on the list of recipes to try with it.

We just finished our 2nd batch last night. The kids can't get enough! Ok - I can't either! Yay for Vegan brownies! I do think I need to try the cherries though - what a nice touch!

This is an awesome site! Since you're really into great food and great recipes, I think you'd also be interested in FohBoh, (http://www.fohboh.com/?i=28chblcn8r176) the online networking site for the International Restauarnt Industry. It's got great information and interaction with restaurant professionals, executive chefs, videos of culinary techniques and recipe preparation, a vibrant wine community with internationally renowned somelliers and people like you and me just interested in food and drink. The site is worth checking out, and I think you'd find a great deal of value there for both yourself and your blog.

Have an awesome day! Cheers!

Those look nice and dense and moist and good.

Another recipe reminder that dates are magic!

I also like the combination of medjools, almonds, black pepper, and whole vanilla. (Especially when made in the form of almond milk.) Can't wait to try this in your solid form.

Kickpleat - I love Lara Bars!! Let me know how you like these!

Cindy - this was actually the first time I used it too, so I'm eager to find new recipes to try it in.

LJ - they are tasty and delicious!! No wonder your kids love them!

Kevin - thanks for the kind words! They are very tasty. Try them and let me know how you like them!

Mcauliflower - Now that combination sounds tasty! I will definitely have to try that in the very near future!!

I doubled this recipe and used cranberries rather than cherries and tossed in some cinnamon. It worked out great, and my mother in law, who is dairy free, got to have brownies.

This makes a nice base from which to improvise. Next time I may do pistachos instead of walnuts, raisins instead of cherries and possibly almond flour rather than carob powder. Throw in some cardamon and you would have something very intriguing, I think.

Thanks! This was awesome!

KathyJ - Oh, I love your modifications. I will definitely have to give them a try. You're right - the possibilities are endless!

since you already know how I felt about the brownies- great picture!!

Thanks! My son was recently diagnoses with a milk allergy and loves brownies so these are a life saver.

These look great and sound so healthy!

Anon (aka. Natty Ice) - thanks, although I do think you secretly loved them.

Anon - let me know how he likes them. They seem to be very kid friendly.

Meeso - thanks! They are definitely healthier than regular brownies!

I am going to try these tonight! I love love love this blog!

aka anonymous.... My son loved them!! As did my other son, my finiky dad, my health conscious mom, my beer drinking neighbor and me! I made a little change: I made a double recipe using a cup of dates and a cup of dried cherries and dried cranberries. I also used honey and added a tsp of vanilla and a touch of cinnamon. I also made a second batch with Pecans instead of walnuts. My dad inhaled these. We took them camping and they were great for hiking! Thanks so much!!

So I glad I found your blog - fabulous! I cannot wait to try these as well as some of your other goodies.
Thanks!

These look great but I am not a big fan of chocolate or carob. Do you have any suggestions for another way to flavor these? Thanks!

Not so much brownies in texture or taste, but more like Tootsie Rolls. Which is more then fine in my book.

Just a note - for these to be really considered raw, the walnuts should be raw, not roasted.

these sound fantastic - might try them with almond butter instead of the carob to make them, vegan, SCD too.

Lovely site - is that a formica table I spy under those brownies? Love formica too.....

I just tried these, totally expecting them to taste way too typically "healthy flavored" for me, but they were SO GOOD. Plus, I don't even feel bad about eating them! My only problem is they made my food processor a bit unhappy while combining everything. Ah well. Maybe it was just jealous.

These turned out so flippin' fantastic! This will become a staple in my repertoire! I

I made these with dates and cranberries, yum! Next time I might make them into little balls and roll them in sesame seeds. Wonderful treat!