I tried my first samosa when we lived in Nairobi, Kenya. There was a great little Indian restaurant that made the absolute best ones. However, theirs were made with highly-seasoned ground beef, wrapped in a thin little pastry shell, deep fried, and served with fresh lime wedges. It wasn't until many years later I discovered that traditional samosas are potato-based.

I've been wanting to try my hand at making samosas for a long time, and I finally decided to just go ahead and do it. I'm so glad I did, since they were fairly easy to make. I also baked them instead of the traditional deep-frying method, which makes them a bit healthier than the regular ones. They also freeze really well, so you can always have them on hand. I used wonton skins, and since it was fairly difficult to get a nice "samosa triangle," I decided to just roll them like an eggroll.

The chutney is amazing. It's super fresh-tasting, and it has that nice spiciness to it. I love the combination of the fresh mint and cilantro. 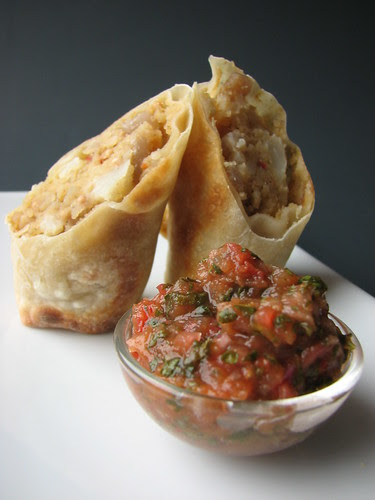 In a large saucepan, place potatoes in highly salted water. Boil until tender, drain from water, and place into a large mixing bowl. Mash, retaining some texture. Bring a smaller pot of salted water to boil, and boil cauliflower until tender. Drain and add to potatoes. In a small skillet, saute onion in olive oil until tender. Add to bowl, along with remaining ingredients. Combine all ingredients well. Place a generous spoonful on the end of a wonton wrapper, and roll up like an eggroll, sealing the end with a touch of water. Place on oiled baking sheet and continue with remaining filling and wrappers. Place into a 425 degree oven, and bake 30 minutes, turning every so often, until samosas are nicely browned. Remove from oven and cool slightly before serving.

Place all ingredients in a food processor and process until finely minced. Allow to chill in the refrigerator for an hour or two for flavors to meld together.
Posted by Fiber at 7:22 AM

These sound lovely, I'm looking forward to trying them myself, though I suspect I'll use file instead of wonton skins, since that is what I have on hand.

When you say they freeze well, do you mean before or after cooking?

I froze them after they were baked, although I think they would probably do just as well pre-baked.

These look delicious! And the fresh salsa makes all the difference.

Your samosas look delicious, what a beautiful way to present them! :)

These look wonderful--both the samosas themselves and the photograph. We had some of these tasty appetizers this weekend at Udupi Palace, an excellent vegetarian Indian restaurant on Chicago's Devon Avenue. I'm glad to see that making them is fairly easy. About how many did your recipe end up making?

What a great sounding recipe ! A very unique blend of flavor. I'm definitely going to try this. What is Tamarind paste ?

Welcome back! I hope all is well with your father's recovery.

This recipe sounds fabulous! I love that I now have another use for wonton wrappers.

oh these sound and look wonderful. I will have to keep this recipe in the "must cook" file.

Those look wooooonderful...as my mouth starts to water...

they looks so pretty and yummy! thanks for share.

this is such a beautiful presentation and photo --- as usual. im completely jealous. (ive had no time to cook lately)

I'm not much for cauliflower, but this looks great!

This is awesome and healthy.Nice presentation too.Love your blog